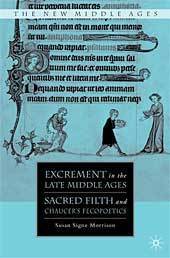 It fascinates me to see so much excrement in medieval works. Here I explore why that is.

Why does excrement appear so frequently in medieval literature, especially the works by Geoffrey Chaucer? Do you dare to find out? Your face will flush with excitement when you read Excrement in the Late Middle Ages. I have been interviewed by WIRED, The New Yorker, and The History Channel on defecating and the history of toilet paper.

"If you thought there was something crappy about the Middle Ages, you d be right. This book rubs our nose in the excremental poetries and culture of the High and Late Middle Ages, reminding us that waste is everywhere the foundation of civilization. In this fine and comprehensive study of that which we mark off as different from us, excrement becomes the necessary stuff for understanding identity, desire, and history. In the end, we realize that a critique of shit is a critique of culture."
- Michael Uebel, author of Ecstatic Transformation: On the Uses of Alterity in the Middle Ages and co-editor of The Middle Ages at Work

"Effectively a cultural study of "how late medieval England dealt with excrement," this book has much broader applications. In a truly fearless and foundational work, wide-ranging and adventurous in scope, Morrison draws from new and pertinent critical approaches (ecocriticsm, waste studies, green studies) and some of their source disciplines (psychology, anthropology, sociology) to invent, define, illustrate and examine the practice of fecopoetics - the "cultural poetics of excrement." The result is an accomplished interpretive sourcebook that enriches our understanding of a seemingly remote era, holding up, as it were, a distant mirror to reflect our historically complex relation to our own waste. A pungent and salutary whiff from the dunghills of European history."
- Jeff Persels, French Department and Director of European Studies, University of South Carolina andco-editor of Fecal Matters in Early Modern Literature and Art: Studies in Scatology

"Some fastidious readers might be tempted to turn away from the pungent topic of Susan Morrison's new book. To do so would be to miss adventurous theory, wide learning, fascinating stories, startling juxtapositions, and witty writing that presents Chaucer as he has never been seen before, both disturbingly transformed and oddly familiar. History from the bottom up has never been so surprising or so much fun - a bathroom book for scholars."
- C. David Benson, Professor of English, University of Connecticut and author of Public Piers Plowman: Modern Scholarship and Late Medieval Culture

Rich in historical contextualization and enlivened by contemporary theory, Morrison¹s excellent study sheds new light on the problem of the sacred and the profane in Chaucer and other late medieval writers. Powerfully challenging the stereotype that medieval people were comfortably awash in filth, Morrison schools us in the nuanced meanings of medieval excrement, whose position in medieval culture was in fact ambivalent and various. Fascinating, accessible, and incisive, Excrement in the Late Middle Ages is required reading not only for Chaucerians, but also anyone working on material culture, the body, the city, theology, and devotional literature."
- Kathy Lavezzo, English Department, University of Iowa

"This groundbreaking study looks as what the Middle Ages really liked to talk about, not merely the things we like them to talk about. Susan Signe Morrison makes the case that we cheat both the authors and ourselves if we fail to look at the full range of medieval poetic expression. After this rigorous, astute, and insightful book, no one should doubt her. Using both theory and close textual analysis, Morrison has produced a persuasive argument for the fact that we should take these matters as seriously as Chaucer did. This book will turn thought about medieval vulgarity on its end."
- Martha Bayless, English Department, University of Oregon and author of Parody in the Middle Ages

"Morrison's study offers an engagingly written book that makes a convincing case for the cultural significance of the medieval fecal and that elucidates Chaucer's poetry in thoughtful ways."
- The Medieval Review