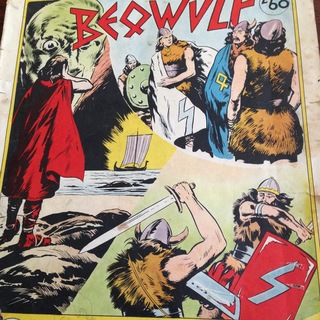 Cover of the 1950 Italian reprint of the original 1940-41 Beowulf. Leggenda cristiana dell'antica Danimarca
I’m delighted that my article “Grendel’s Mother in Fascist Italy: Beowulf in a Catholic Youth Publication,” has just been published in the International Journal of Comic Art. This essay focuses on a 1940-41 Italian comic book version by Enrico Basari (author) and Kurt Caesar (illustrator). An anti-semitic portrayal of Grendel’s Mother grows out of German views of Beowulf in the 1930s. The anti-semitic overtones present in German Beowulf youth translations and adaptations sympathetic to Nazi German propaganda, produced in the decade before and simultaneously with the publication of the comic under scrutiny here, likewise crop up under the Italian fascist reign. The fraught nature of Grendel’s Mother takes on insidious dimensions in Enrico Basari’s Beowulf. Leggenda cristiana dell’antica Danimarca, appearing in serial form from Oct. 5, 1940-Jan. 25, 1941. It was featured in Il Vittorioso, a Catholic youth publication, “a nationalist publication often distributed through Catholic parishes” (Calderón, 2007:112), that attempted to go beyond mere Fascist propaganda for young people. Just how could an anti-semitic inflected Beowulf comic have affected youth readers?
Be the first to comment