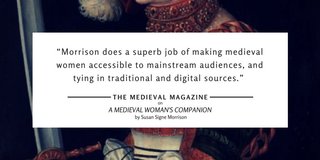 Many thanks to Sandra and her team for producing such a beautiful magazine and website, Medievalists.net.
"Morrison does a superb job of making medieval women accessible to mainstream audiences." Thanks to The Medieval Magazine for this lovely review of A Medieval Woman's Companion on International Woman's Day 2017.

Sandra Alvarez writes, "[I]it is an excellent book for readers who want a good starting point on their journey into women's studies, feminism, and gender during the Middle Ages....The book takes aim at many of the mainstream myths perpetuated about the lives of medieval women, such as, the idea that they lived horrible oppressed lives, and had little to no agency, or the notion that all medieval women were illiterate....Morrison does her best to debunk these claims by providing over 200 pages of examples, from the Early Middle Ages to the beginning of the Early Modern period....She also discusses how to approach medieval texts with a view to modern concepts of freedom and agency...Morrison does a superb job of making medieval women accessible to mainstream audiences, and tying in traditional and digital sources."